On the 31st May 2021, Jen Turnbull, from Southwaite near Carlisle was involved in a horse-riding accident at the Nord Vue Equestrian XC Course.  One of our BEEP Doctors, Theo Weston was called to the scene where he cared for Jen.  Theo called the Air Ambulance for assistance before Jen was taken to the RVI hospital in Newcastle, where she stayed for 5 days.  Jen sustained a bimalleolar fracture (meaning both the fibula and the tibia were broken straight through and had punctured the flesh of Jen’s leg.) 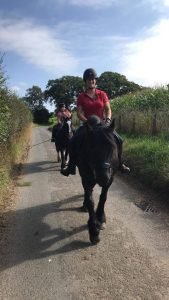 Can you tell us a bit about what happened to you?

It was at the end of what was initially a brilliant XC lesson. A jump over a large log had been added on by the instructor so my horse hadn’t seen it before. As I approached the jump, he dodged out to the left, I was knocked off balance – not helped by the saddle slipping – and came off. It wasn’t a bad unplanned dismount as such, I’ve had worse on bigger horses! Unfortunately, it was the landing that was the horrific bit as my foot must have hit a divot and my body followed with the force, snapping my fibula and tibia!

What injuries did you have?

I had emergency surgery first thing on 1st June 2021 where an ORIF was performed by a Consultant Orthopaedic Surgeon. My x-rays were passed round the RVI apparently as everyone was impressed how they managed to repair such a ‘devastating’ injury!

How is your recovery going?

The bones healed with no issues and the sutures healed well. I had 6 weeks non-weight bearing and 6 weeks partial weight bearing. Around week 10, I felt as if it was strong enough to hobble without crutches for a few steps. This was confirmed at the 12 week x-ray and I was discharged from the fracture clinic at the RVI.  I was told that there were no restrictions as such regarding riding, running etc – IT will tell me what I can do. I now have a titanium plate with 5 screws permanently in the ankle. The ankle joint will never be the same as they had to reconstruct the cartilage in the joint that the tibia fracture had gone straight through.

I am back riding, although haven’t jumped since and likely will not again, but we have done a few long hikes walking so far, the longest being almost 14 miles so that’s great progress! The whole recovery will be minimum 12 months so I’m around halfway. The ligaments and tendons in the ankle joint will still take a long time, but regular exercises and stretches will hopefully continue to aid their progress.

I am just so eternally grateful to Dr Weston who by all accounts actually saved my foot! Having spoke to the surgeons,  if he hadn’t performed the reduction as quickly and as perfectly as he did AND requested the helicopter  – then I could and probably would have had major complications with blood flow and/or infection and would have lost my right foot completely.  I found out later that he was in B&Q at the time with his wife and just dropped everything to come out to a complete stranger!

He was so calm, controlled and professional, I instantly knew I was safe. He acted quickly, reassuring me all the way and administered the ketamine which took the most horrendous pain I’ve ever experienced away. Up until then I’m not sure I was the best patient as the Entonox wasn’t touching it, only creating confusing audio echoes.

I’m planning on walking 26 miles on the anniversary to raise funds and hopefully do the Great North Run again next year, this time for the BEEP and GNAAS.

Thank you to Dr Theo Weston and the whole team for their amazing, selfless work

What an amazing story from Jen and wonderful to think how the fast work of one of our Doctors saved her foot.  Your donations and fundraising ensure that the BEEP Doctors can attend incidents like this across the county and save lives.