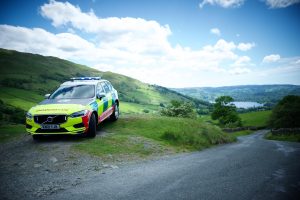 BEEP Doctors (BASICS) Cumbria, a charity based in Penrith, have launched a new emergency vehicle, which has been sponsored by Suffolk based Smarter Metering Services.

The new emergency vehicle will be used to attend serious medical incidents across the county.  The volunteer doctors, who work for BEEP, currently use their own vehicles to attend call outs and so this will ensure the doctor using it has a designated, fully equipped vehicle to attend these emergencies.

The car, is a Volvo XC60 and will be fitted out with emergency blue lights, sirens, dash cams and branded livery.

Tom Ward, from Smarter Metering Services is sponsoring the leasing of the car to the charity.  He was aware of BASICS as a national charity for some time having had treatment from a BASICS team in the south of the country a few years ago.  He had the initiative of donating some vehicles to BASICS and got in touch with BEEP Doctors after connecting via social media.  Tom comments,

“I really wanted to help the BASICS charity and as part of our business is leasing cars, we thought this was a great way to help.  We have donated several cars across the UK now, but we are very excited to be helping the BEEP Doctors as we understand the difficulties of working in such a rural location and how vital having a robust vehicle is when attending emergencies.”

The new emergency vehicle will initially be stationed at BEEP’s new headquarters in Penrith but will be used by doctors in the far north of the county, to the south lakes and west Cumbria as well, on a rota system.

Dr Chris Moss, one of the BEEP Doctors who made the initial contact with Smarter Metering Services, added;

“We are hugely grateful to Smarter Metering Services for donating this car to us.  It will mean we have a really visual presence in the county and enable us to get to incidents more safely.  The dream would be to have a fleet of cars for all our doctors, and this is something we aim for in the future.”

2021 has been an exciting year for BEEP Doctors (BASICS) Cumbria so far, not only has their new vehicle arrived, but they have reached 85% of their fundraising target for the year.

At the beginning of the 2021, the charity set the huge challenge of raising £145,000 in 6-12 months. Each doctor carries a basic amount of equipment, which they need to attend call outs. The more serious the incident they attend, the more advanced equipment they need to monitor patients, perform life saving surgery or anaesthetize patients before they are taken to hospital.

The doctors are all unpaid and are on call 24/7 – even during the Pandemic, when many of them have been working in hospitals and the local community.  The BEEP Doctors are not funded by the NHS, so donations, fundraising events and grants keep the charity going and buy the vital equipment they need.

As well as the many donations online, grant funding and the donation of the new BEEP vehicle, the team still have some fundraising to do to hit their target.  A sponsored bike ride will be taking place around Cumbria in July and a team of ten will be taking on the Great North Run to raise even more funds.

If you would like to help support BEEP Doctors (BASICS) Cumbria, you can donate online at https://www.justgiving.com/campaign/BEEPDoctors or get in touch to run your own fundraising event.